Who are you and what have you done with Jennifer?

Had I carefully read and considered the recipe for the dish pictured above I would never have made it.  I would have thought: vegan, steamed vegetables, grains, “clean,” no one will like it.

But I didn’t carefully read or consider the recipe, made it, and as clever readers have already surmised from this set-up, we loved the dish. Mark finished and said, “Wow, what a great dinner.”

To put that in context, the night before last Mark finished the dinner I had served, a Thai beef stir fry, and loutishly announced, “I give that a B.”

The recipe for this bowl comes from Bowl by Lukas Volger. Given my recent enthusiasm for bowls, the book caught my eye when I was at the library. 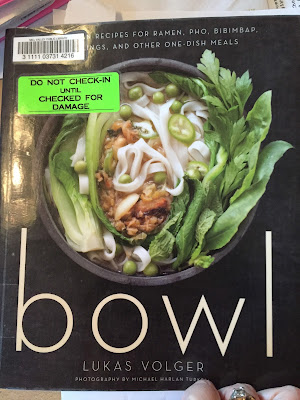 Given my longtime enthusiasm for Laurie Colwin, this recipe caught my eye when I was idly flipping through the book: 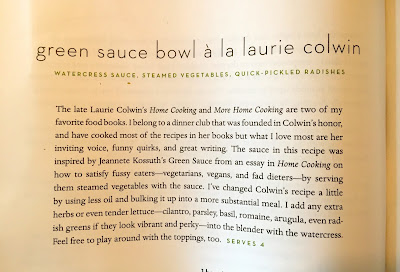 The dish is simple: mixed grains topped by steamed vegetables, quick-pickled radishes, toasted walnuts, and a sauce that consists primarily of leaves.

Sounds dreadful, at least to me, but that sauce is improbably magical. Four ounces watercress, 1/2 cup leafy herbs (basil, cilantro, parsley), 1/3 cup olive oil, 1 clove garlic, the green part of a few scallions, and a pinch of salt go into a food processor or blender. Puree until satiny. I used arugula as I couldn’t find any watercress and added a little extra olive to make the sauce smoother. You could serve this powerhouse sauce on plain steamed vegetables and be very happy, but if you aren’t on a low-carb diet, I would go for the full-carb package. I’d never made mixed grains before, but I will be making them again: 2/3 cup medium grain white rice, 2/3 cup millet, 2/3 cup quinoa. Rinse, put in a pot with  3 1/2 cups water and a big pinch salt, bring to a boil, cover, lower heat to bare minimum, and cook for another 15 to 20 minutes. It’s fluffier than quinoa or millet and has more protein and character than white rice.

This is an early version of the recipe that appears on Volger’s blog. It’s a bit different from what you’ll find in the book, but not in any important way. (The sauce recipe I gave above reflects the changes in the book.) For topping I went with steamed broccoli, steamed yellow squash, and steamed sliced sweet potato, along with some quick-pickled radishes Volger provides a recipe for. I loved the sliced sweet potato, liked the broccoli, was indifferent to the squash and the radishes. Avocado would work well as would some zestier pickle. Good stuff.