All I want to cook right now are quick, easy dinners that everyone will like and eat and not complain about. I currently have no desire to bone chickens, stuff dumplings, master cassoulet or even fry doughnuts. What is happening to me?! Have I become normal? I keep wanting to say, “I’m so lazy,” but falling back on “lazy” is what’s lazy. Lazy would be actually wanting to cook an elaborate dinner and then slumping on the sofa to watch The Texas Chainsaw Massacre instead. I don’t want to cook an elaborate dinner, I choose to slump on the sofa watching classic horror movies.

And for this state of mind, Nigella is really just perfect.

Someone in the comments asked me to pick the best Nigella Lawson book and the short answer is, I can’t. Her voice and style are so distinctive and consistent that it’s hard for me to remember which book a recipe comes from. For instance, the two fantastic dishes I made this week -- Korean kheema and crustless pizza -- came from Nigella Kitchen, but they were so quick and easy I thought they’d come from Nigella Express. I flipped through Nigella Express looking for them so I could describe them to you and soon realized it was the wrong book. Maybe as I cook steadily from Nigella’s oeuvre I’ll get a better handle on the identities of the different books, but for now, I’ll just say I like them all.

So, here are the two recipes I loved this week:

-Korean kheema. The name could use some work. Kheema is an Indian ground lamb dish and this is a ground turkey dish with Korean flavors. It’s powerfully spicy, so if fire isn't your thing, skip this altogether. The original recipe includes peas, which I replaced with big handfuls of baby spinach. Pre-washed from the bag, naturally -- not lazy, a choice, and a good one, albeit a bit expensive. I almost substituted ground beef because I don’t like ground turkey, but trusted Nigella and was rewarded. There’s so much flavor (and so much sugar!) in the sauce that you won’t be able to tell what protein you’re eating. Also, I have wondered whether Nigella meant to call for rice wine vinegar, which is tart, rather than rice wine/mirin, which is sweet.  Or maybe she intended to call for a non-sweet type of rice wine? I used mirin, but it would be interesting to see if rice wine vinegar added another dimension. Maybe next time I’ll try it. Finally, you will need gochujang, available in Asian markets. If you want another use for it, have a bunch of friends over and make bo ssam.

I doubled the recipe and this is reflected in my adaptation:

Whisk together 1/4 cup gochujang, 2 tablespoons honey, 2 tablespoons rice wine (mirin), 1/4 cup soy sauce. Stir in 1 pound ground turkey and let marinate as you get everything else ready. Chop a bunch of scallions. Heat a tablespoon oil in a skillet. Add the scallions and a few big handfuls spinach. Cook for several minutes until the scallions are soft and the spinach has shrunk to almost nothing. Add the turkey and stir-fry 5 minutes or so until it’s cooked -- it’s hard to tell when it’s done because you can’t really see the color. Err on the side of caution and cook longer rather than shorter. Mix 1/4 cup rice wine with 1/2 cup water and use this to swill out the sauce residue in the turkey bowl. Add to the pan. Cook for a minute or so until everything is bubbling and very hot. Serve with rice -- you need a foil for all that flavor -- and top with chopped cilantro. Sometimes you can skip the garnish, but the cilantro really brightens this rich, spicy dish. Serves 4, or 3 with leftovers. 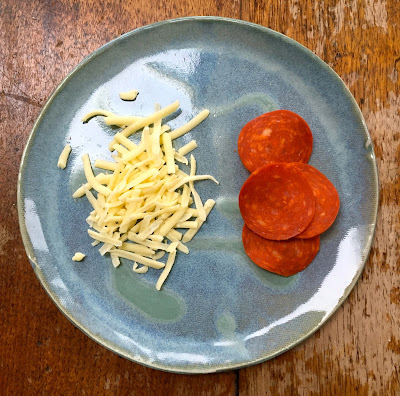 *Nigella’s crustless pizza is, in my opinion, dreamy. Sadly, not so good for you. Also, “crustless pizza” is a misnomer because the pizza actually makes its own crust. That’s the magic of it. You mix egg, flour, salt, and milk, and fold in some shredded sharp cheddar. (Nigella doesn't specify sharp cheddar, but I recommend it. Also, buy the pre-shredded if it’s cheaper, as it was at my supermarket.) You pour this batter into a buttered pie plate and bake. It will puff almost to the top of the pie plate, like a popover or Yorkshire pudding. Now top with more shredded cheddar and pepperoni and whatever else you want. I used some fresh mozzarella and I think the dish benefited from the extra cheese. Bake a few minutes more until everything is melted and hot. The crust is crunchy on the edges, slumped, cheesy, and tender in the middle. I doubled the recipe and made two pizzas.  Three of us ate one and a half. The recipe is here. I wanted to make a salad to go with it, but in the end, I could not be bothered. Yes, that was a choice, but it was a stupid one, and lazy. Serve this pizza with a salad.
Posted by tipsybaker at 4/10/2016 10:16:00 AM