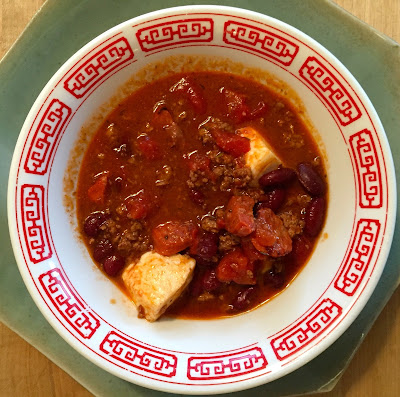 We didn’t go anywhere for spring break. Mark worked, poor guy, while Owen and I toured a local art college, ate fried chicken and waffles at a famous soul food restaurant, saw Midnight Special, paid a visit to the pediatrician (6 feet, 132 pounds, a height-weight ratio I'd associate with war zones), searched in vain for copies of the first installment of Ta-Nehisi Coates’ Black Panther at three different comic book stores in three different Bay Area counties, acquired a youth bus pass at the transit center, bought our cats their first ever organic cat food, which they hate, and planted a vegetable garden. It was a good week. I’m sorry it’s over.

As to cooking, Nigella continued to deliver delicious dishes with almost zero effort on my part. Her green minestrone (from Nigella Kitchen) is basic and tasty. Ditto her parsley pesto (Nigella Kitchen), which is like basil pesto, but milder. I served it on spaghetti and the whole pound was gone in about twenty minutes. I like to think Owen ate most of it, but fear he did not.

I was skeptical of Nigella’s cheesy chili (Nigella Kitchen again), a melange of Spanish chorizo, ground beef, canned beans, cocoa, and oregano, as it contained no chili powder. How can you call something chili that contains no chili? You can’t. Sheesh. The “chili” was pathetically bland so I added a couple teaspoons chili powder and that did the trick, brought the whole dish to life. Who'd have thought. Anyway, once the spicing was adjusted, the chili was fantastic. It’s called cheesy chili because you add big chunks of fresh mozzarella to the hot chili at serving time which allows you to spoon up gooey pieces of melting cheese, sort of like chili pizza. Mark said, “Why don’t you make this once a week forever?”

That’s it for food this week. Here are some book recommendations: 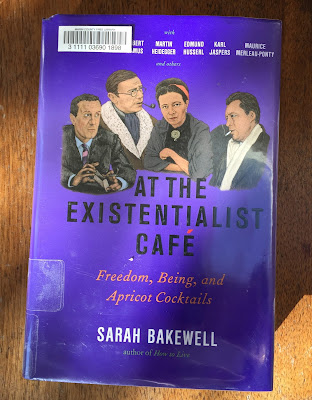 *In At the Existentialist Cafe, Sarah Bakewell sorts through an unwieldy mass of material -- personalities, politics, history, gossip, unintelligible German philosophy -- to recount the history of 20th century Existentialism in a way that anyone can read and understand. I came across an amazon.com review that described this excellent book as “glib,” which annoyed me so much that I actually replied. Sure, if you want to grasp all the nuances and complexities of Heidegger’s thought, go right ahead and grab a copy of Sein und Zeit. I wish you well. See you in thirty years. If not, try At the Existentialist Cafe. People seem to think it's easy to write about complicated subjects in a lively, accessible way for the common reader.  I would guess it's much easier to write about complicated subjects in a cryptic way, for the expert. 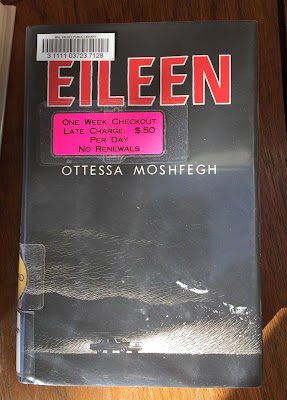 *Eileen, the narrator of Eileen, a disturbing, riveting novel that was nominated for some big awards last year, is a resentful, sexually repressed young sociopath with an eating disorder who shares a filthy house in a dismal New England town with her alcoholic father and works at the local prison for boys. Yep! Fun. Ottessa Moshfegh really “goes there” with her anti-heroine, which makes for some wonderfully dark, bracing reading. You don’t often meet characters this miserable and toxic and if you like that sort of thing, as I do, you will like this book very much. Eileen lets you know from the beginning  that something big is going to happen to change her life and I couldn't wait to get to this thrillingly twisted event, whatever it might be. Alas Moshfegh let me down! Did she lose her nerve? The book falls apart towards the end. It's still impressive, but I can only half recommend it. 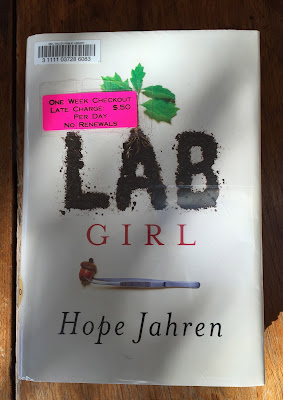 *Hope Jahren’s memoir, Lab Girl, made me think about trees in a whole new way, which is to say, it made me think about trees. Short, enthralling chapters about tree life alternate with long chapters about Jahren’s human life, which has included bipolar episodes, sexist colleagues (she was banned from her own lab during her pregnancy), professional triumphs and travails, trips to collect plants and soils in the wilds of Ireland and the American South, her longstanding devotion to her eccentric lab partner, and, above all, her mad love of science. This book is uplifting, super-smart, incredibly well written, just delightful. I highly recommend it.
Posted by tipsybaker at 4/16/2016 03:19:00 PM