I write to you from a hotel patio on an island off the coast of Thailand. Palms are rustling, tropical birds chirping, some French kids splashing around in the pool. I can hear, but not see, the ocean. It's pretty nice, but not quite paradise because it's also roasting hot and we're totally lethargic and covered with mosquito bites. My bathing suit is too tight and we keep nervously joking about tsunamis. Did you see The Impossible? Don't! It will subtly darken any future visits to the beaches of southeast Asia.

I won't bore you with a long blow-by-blow account of this beautiful trip Isabel and I took to Myanmar and Thailand. Just a short blow-by-blow.

I'd decided this trip was a huge mistake about a week before we left. I worried Isabel wouldn't enjoy it, that she'd sigh and complain about the heat and exotic food, I'd lose my temper, we'd bicker and have a miserable or even just mediocre vacation together and then she'd go off to college and I'd never see her again. Something like that.

We arrived in Yangon after twenty hours of sleepless air travel and our guide took us straight from the airport to see a Burmese white elephant. Standing there in the soupy heat looking at this white elephant (actually, pinkish beige) I began fretting about Isabel's state of mind.

Was she weary? Was she hot? Was she sighing? Should I ask the guide to take us to the hotel so she could rest? I glanced at Isabel to read her mood and in that instant my worries all evaporated.  She smiled at me, totally radiant. She was into it. Not minding the jet lag, not minding the heat, just dazzled and fascinated by the strangeness and beauty of this new place like any sane, curious person would be. Why had I doubted her? I knew then that this trip was going to be wonderful and haven't worried about anything except dysentery and tsunamis since.

There's more I could say about Yangon -- about the lovely British colonial architecture, the magnificent Shwedagon Pagoda, the Reclining Buddha, how quickly you become accustomed to women with thanaka paste on their cheeks and men in longyis -- but I promised to keep this short. 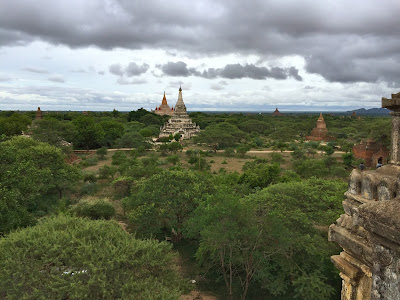 There are more than 2,000 pagodas in the ancient kingdom of Bagan and we visited a good number of them. (My picture does an ok job capturing Bagan's splendor, but this one does it better.) We climbed pagodas, circled pagodas, admired carvings outside pagodas and murals in the cool, dark interiors of pagodas, where you could hear and occasionally see the resident bats. Has David Quammen's Spillover been translated into Burmese? It should be.

Bagan is astonishing. If you have a bucket list, Bagan belongs on it.

It was in Bagan that Isabel and I made our first foray into a Burmese restaurant. The place had been recommended by both a tour guide and hotel receptionist, so we assumed the menu would include dumbed-down Burmese dishes translated into English.

Wrong we were. Myanmar isn't all that touristy yet, and I'm ashamed to report that authentic Burmese food terrified us.

Not only were there no English translations on the menu at this restaurant, there was no menu. We sat down and scowling waitresses began smacking dishes on the table in front of us. Dish after dish after dish of murky, room temperature mystery food. Seventeen dishes in all, including dessert. We finally identified some chicken and pork in oily sauces and a pile of leathery fried fish. There were also pastes and pickles that resembled those we'd just seen an hour ago, mounded in baskets and dotted with flies at the local market.

At nearby tables, big, chatty groups of Burmese were happily gobbling up their lunches, but all I could think was: DYSENTERY. We picked at our meal, some of which was tasty enough, like the stir-fried greens, but most of which was repulsive, like the gristly gobs of tepid pork. After we'd made a polite dent in maybe a third of our dishes, we paid up, skulked off into the blazing afternoon, and didn't venture into another Burmese restaurant on our own for the duration of the trip.

Inle Lake is a vast lake in the middle of Myanmar where villagers live in stilted teak houses built on the water and travel around on long, skinny boats. We saw lots of babies during our time on Inle Lake, but no barriers or baby gates between the living spaces and the water. I'm a product of my (anxious, death-fearing? sensible, life-loving?) culture and couldn't stop thinking about the dangers. Eventually I asked our excellent tour guide if babies ever fall out of the houses and drown. She answered promptly and cheerfully, "Sometimes they do, yes."

And that was that. 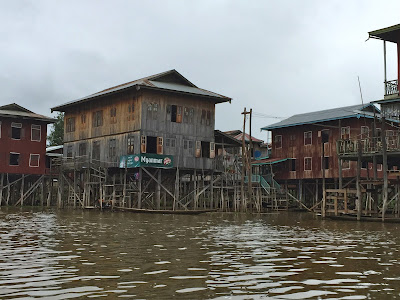 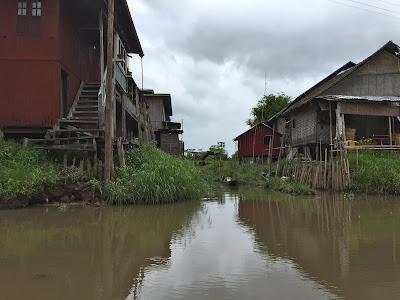 There are really easy measures one could take to prevent babies from drowning, and I would certainly take them if I lived on Inle Lake. But then where exactly do you stop? I thought about this a lot in Myanmar, where they have come to very different conclusions than we have.

Because it was monsoon season, we were among the only tourists on the lake and while we were drenched by the rains, it was absolutely great.
Day 6: Mandalay

If there's one thing I hate, it's tourists who visit a country for a few days and come away with simplistic generalizations about a whole people. Without further ado, here are my simplistic generalizations about the people of Myanmar: There's a gentleness and languor to the Burmese that was startling and disarming and made both Isabel and me feel jaded, worldly, and slightly sad about the state of our anxious modern souls. I don't want to romanticize underdevelopment and isolation, but you can't spend a week in Myanmar without noticing that the people are strikingly tranquil when compared with people you meet almost anywhere else in 2015. The Burmese drive slowly and calmly and walk slowly and calmly. They don't worry about seat belts, life vests, or, as I've mentioned, baby gates. You will see more people laughing and talking on the street in 10 minutes than you will in Mill Valley, California in a month. I don't think we once heard a child cry or whine during our time in Myanmar, and there were children everywhere. Although everyone we got to know even slightly complained about the repressive military regime, they did so sort of cheerfully.

It would be easy to chalk this up to Buddhism, but Thailand is also Buddhist and we sensed no such tranquility among the Thais.

Make of my facile generalizations what you will.

Labels: Burma
Email ThisBlogThis!Share to TwitterShare to FacebookShare to Pinterest