A room without a book is like a body with out a soul?

I've been trying to cook through the estimable River Cottage Veg Everyday and it's been a struggle. Uncle. There's simply not enough in here that I can feed the picky eaters with whom I live.

Fearnley-Whittingstall: "I'm trying to change your life here. The object of the exercise is to persuade you to eat more vegetables. Many more vegetables. And I hope to do so not by shouting from a soapbox, but through sheer temptation. . . "

Does kohlrabi carpaccio qualify as "sheer temptation?" A salad of shredded raw parsnips, cabbage, and dates? Beetroot pizza? Even I quail at kohlrabi carpaccio and there's no way Mark or Owen would touch roughly 85% of this dishes in this worthy book and I'm giving up.

Having said that, I succeeded with almost everything I tried, starting with the brussels sprouts salad I've already written about. The book also contains the easiest recipe I've ever found for vegetable stock, though you do need a food processor. Heat 1 tablespoon oil in big pot while you grate 2 onions, 4 carrots, 4 sticks celery, and a few cloves garlic in your machine. Scrape vegetable shreds into the pot and cook for a few minutes. Pour in 2 quarts hot water, bring to a boil, and simmer for 15 minutes. Strain. Done. I've used this to make a number of Fearnley-Whittingstall's soups (very strong, the soup chapter) and they've all been terrific, though the curried sweet potato soup was a bit too sweet. Mark likened it to "warm honey."

I should add that Isabel and I both fell passionately and briefly in love with Fearnley-Whittingstall's carrot hummus. Roast carrots with honey, cumin, and coriander, then puree with tahini and citrus juice. This hummus was fantastic on day #1 and quite tasty on day #2, but on day #3 the flavors had begun to fade and I looked at my little mound of carrot mash and thought: Gerber's. Spell was broken.  Isabel told me she went through a similar infatuation/disillusionment cycle with carrot hummus. If you’re curious, the recipe is here and I do recommend it, though I've done a pretty poor sales job, haven't I.

Verdict: Assess your lifestyle and the tastes of the people for whom you cook and decide whether this book makes sense for you.
*Fika: The Art of the Swedish Coffee Break by Anna Brones and Johanna Kindvall.

It should be clear by now that I'm a fool for Fika. Love! The recipes for sticky chocolate cake and almond tart underperformed, but the buttercup-yellow coconut macaroons were delicious, along with just about everything else I baked from the adorable little volume. Sadly, I'm running out of recipes to try and it is time to move on to a new baking book.

Verdict: Buy.
*The Truth About Chuck Norris by Ian Spector.

Along with his dirty socks and empty cereal bowls, Owen's "literature" can be found strewn around every room of this house. The other day, I wearily picked up a copy of The Truth About Chuck Norris to throw into his bedroom, then paused to take a peek inside what looked like an unusually cruddy book. Twenty minutes later I was sitting on the stairs in stitches, as people used to say. The Truth was published in 2007 and it's been quite a phenomenon, so if you're hip you've probably heard of it already, but if you haven't, now you have and you are very welcome! The Truth About Chuck Norris is filthy, sophomoric, offensive, absurd, and hilarious. Well, to some of us. 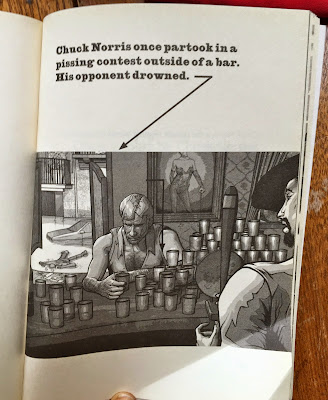