In a bookstore yesterday I spent 30 minutes skimming Nina Teicholz's new book, The Big Fat Surprise. The premise -- that saturated fats have been wrongly demonized and are actually essential to good health -- is hardly new, but the book has been getting huge amounts of attention from the mainstream media. Having come of age in the 1980s, to hear that ice cream is probably healthier than sorbet is like hearing that pigs can fly.  What a stunning screw-up on the part of the public health establishment. If I'd ever actually succeeded in sticking to a low-fat diet, I'd be furious right now.

Fortunately, I failed. I never bought skim milk, cut the fat of my steak, or made an egg white omelet. I wish I could say this was because I knew better, but can't. I didn't adhere to a low-fat diet for the same reason I've never cleaned our refrigerator coils. Seemed like a drag. Couldn't be bothered. Rebellious. Lazy.

Did I feel guilty about it? You bet I did.

It's going to be hard for nutrition "experts" to get me to believe anything ever again.

Since the last post, I went to my 30th high school reunion (sweet), finished the audiobook of Catherine the Great (tremendous), started the audiobook of On the Noodle Road (not tremendous), and baked a fabulous poppy seed torte out of The Essential New York Times Cookbook. It's a moist, intensely flavored cake so full of poppy seeds it resembles chocolate. If you care, it's gluten-free. Highly recommend.

I haven’t been sticking to a cookbook agenda, which isn’t just a problem for the integrity of this blog, but for me as a cook. Too many options make me crazy. I start flipping through book after book trying to devise a weekly menu plan and hours later I'm still flipping. The one-book-at-a-time program has kept me sane in the past, so I’m recommitting. I'll make 5 to 10 recipes from The New Persian Kitchen over the next week or so.

As I mentioned in a previous post, New Persian didn't impress the older Iranian ladies in the ESL class where I’m an aide. I think it's the "new" that's the problem. The author, Louisa Shafia, grew up in suburban Philadelphia with an Ashkenazi Jewish mother and Iranian father and it doesn't appear (at least as far as I've read in the book) that she's ever visited Iran. She used to work as a chef in a vegan restaurant and the book contains sentences like: “In general, you’ll find that the recipes here emphasize whole grains and gluten-free flours, use minimal amounts of oil and fat, and call for alternatives to white sugar.”

None of this means The New Persian Kitchen can't be an excellent cookbook, but might explain why it didn't resonate with a group of Farsi-speaking octogenarians.

So far, the recipes have been solid. Wednesday, I served Shafia’s radish, rhubarb, and strawberry salad. It sounded fresh and unusual and was, though I would not in future put raw rhubarb in a salad or anything else. Raw rhubarb is bad and should not be eaten. Feel free to disagree, but I won't be budged. 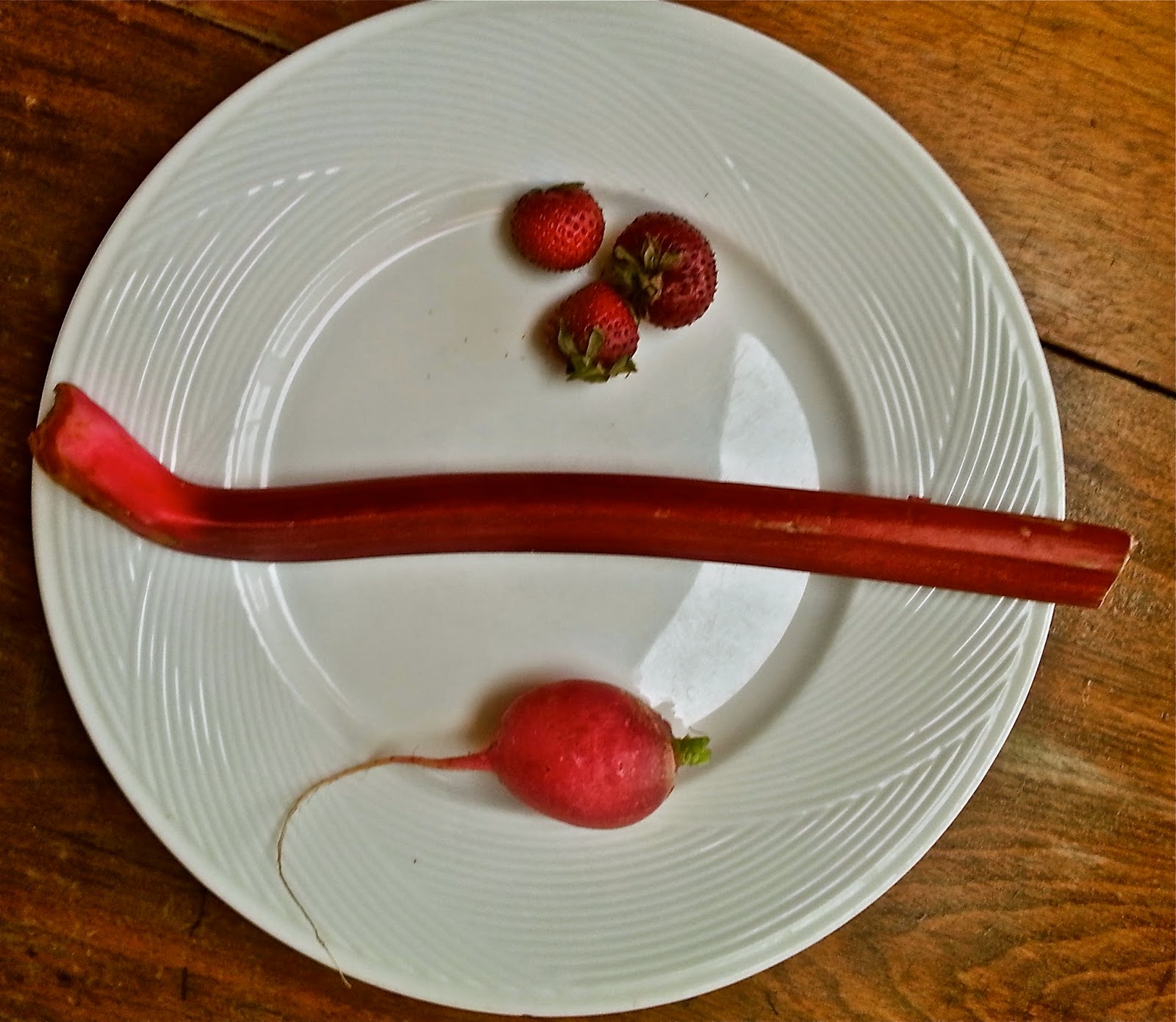 Thursday night, I served Shafia's chicken salad with potatoes and olives which consists of chopped cooked chicken (rotisserie), green olives, yogurt, potatoes, and roughly 3 tablespoons of freshly ground coriander, fennel, and mustard seed. The tangy yogurt dressing contained just enough olive oil to soften its rough edges and the spices were magical. I'll say it again: MAGICAL. I couldn't get enough of this salad, though I'd omit the potatoes next time and stuff it inside pita bread with cucumbers and tomatoes.

It was just Owen, Mark, and me both nights, as Isabel is rarely home for dinner these days. If she isn’t at dance class, directing a play, or babysitting, she’s out with her friends. I miss her, but understand this is as it should be. Mark, Owen, and I have gotten in the habit of watching TV while we eat dinner and are currently into Game of Thrones, which we love, and Silicon Valley, which I'm ready to abandon. Fargo seems too realistically gory for mealtime, but Penny Dreadful might work. We have lots of fun watching TV together with our plates balanced on our laps, and there are fewer complaints from some quarters about the food. I've also noticed that a lot more salad gets eaten while attention is directed at the screen. All the experts says watching TV while you eat is terrible, but that’s what they said about cooking with butter and cream. I’m not listening anymore.
Posted by tipsybaker at 5/26/2014 09:23:00 AM