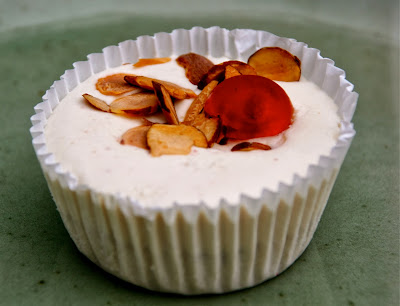 If I don't convince you to make biscuit tortoni at your soonest possible convenience, I haven't done my job.

As you can see, biscuit tortoni is lovely looking. It's rich and clean-tasting, but also a little rummy. The texture is that of a firm ice cream. Amanda Hesser wrote about it beautifully a few years ago in the New York Times. In Classic Desserts Richard Olney states that the dish was invented in 1798 by a Neapolitan restaurateur in Paris named Tortoni. According to Caroline and Robin Weir, authors of a big, authoritative book on ice cream, this is incorrect. I read their minutely detailed and meandering two-page history of biscuit tortoni from which I gleaned this: Someone invented biscuit tortoni somewhere, probably at some point during the 19th century. It is likely called "biscuit" because it comes from a line of frozen desserts flavored with crumbled breads, cakes, and biscuits. The Weirs aren't really sure about why it's called "tortoni." The end.


There are lots of biscuit tortoni recipes out there. The Weir recipe calls for cream, maraschino, egg yolks, sugar, and kirsch. Into the custard you can crumble shortbread, graham crackers or almond macaroons. They write that the dessert has "the typical, rich, hedonistic flavour of the Victorian period."

Richard Olney plucked the recipe for Classic Desserts from American Cooking: The Melting Pot and it is very different from the one in the Weir book. It is fabulous and I like to think that it, too, has the rich, hedonistic flavour of the Victorian period.

1. Put cupcake liners in a 12-cup muffin tin. In a bowl, stir together 1 1/4 cups heavy cream, the macaroon crumbs, sugar, and a pinch of salt. Chill for at least 30 minutes.
2. When the mixture is cold, beat the remaining 1 1/4 cups cream until it thickens and forms soft peaks. Gently fold it into the macaroon mixture.
3. Fill the paper liners with this mixture. Do it neatly. Sprinkle with a few almonds, wrap the whole pan tightly in plastic wrap and place in the freezer.  Freeze for a few hours, until completely firm.
4. When you serve them, put half of a cherry on each dessert. Makes 12.

And with the biscuit tortoni triumph, I'm done with my official five-recipe foray into Classic Desserts. It's a phenomenal book. The biscuit tortoni and the syllabub recipes -- jewels! The other three recipes I tried (tea cream, crepes suzette, butterscotch parfait) were all very good. You can buy a copy of Classic Desserts at evil amazon for one penny plus $3.99 shipping. Friends, this is a deal you should not pass up.

We're on to Soups now and I'm not too psyched.

On another subject, I made runzas (yeast dough, beef-spinach filling) using the recipe in the The New Midwestern Table. 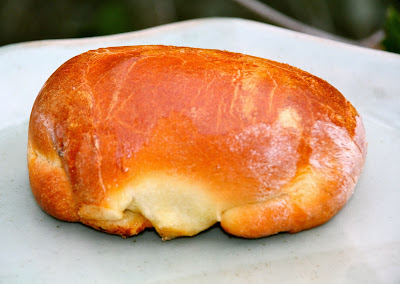 They reminded me a little bit of piroshki and a little bit of Chinese barbecued pork buns and they were tasty, but breadier than Owen and I would have liked. Mark said they were "perfect." But I think I'll try making piroshki before revisiting runzas.
Posted by tipsybaker at 12/12/2013 09:20:00 AM