Two recommendations and a recipe 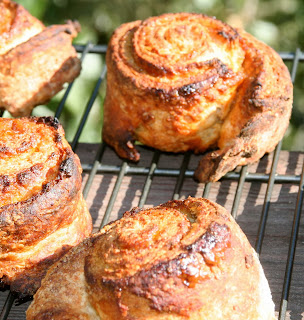 I opened a canister of maple sugar a few weeks ago to make these superb cookies and since I was on a maple sugar roll (so to speak), this past weekend decided to try the rye-maple danish from Kim Boyce’s Good to the Grain, a terrific book that won all sorts of accolades back in 2010. If you haven’t bought the book already, Boyce's chocolate chip cookie recipe will convince you to do so. The danish pastries aren’t in the category of the chocolate chip cookies, but little is. They're just very tasty.

Here’s the thing. For me, a danish really needs to be plump, soft, blond, and sweet. These estimable danish are lean, angular, brown, and not very sweet. I envision the ideal baker of these danish as a restrained minimalist who lives in a modernist house decorated with austere textiles and landscaped with gray-green native grasses. That is not me. Owen and I both felt the danish needed more sugar and I kept thinking they would be perfect if thickly frosted with maple icing. But that would be like throwing your grandmother's afghan over the back of the Eames sofa. All wrong. In short, while I liked the recipe, some people are going to adore it and I hope that after my description you know who you are.

Done with food for now.

Recommendation #1: Mark and I went to see Captain Phillips on Saturday night and I thought it was stunning. Highly recommend. I’ve read virtually nothing about Captain Phillips, but it made me think about justice, poverty, maritime law, and American military might. I'm still wondering whether the ending was happy, tragic, or intentionally ambiguous. Meanwhile, I’ve read dozens and dozens of articles about Blue is the Warmest Color, which was poignant, but incredibly long and left me wondering about little except why the central character never brushed her hair.

Recommendation #2: Have you watched Enlightened? I’ve never seen anything like it. I’ve searched for reviews that capture its radiance and oddity, its blend of cringe-inducing comedy and transcendent sweetness, but can't find one. I don't think the trailer does a good job of capturing the feel of the show, either. You just have to see it for yourself. HBO canceled Enlightened but there are two whole seasons to enjoy on DVD if you find it is your cup of tea.
Posted by tipsybaker at 11/11/2013 05:25:00 PM