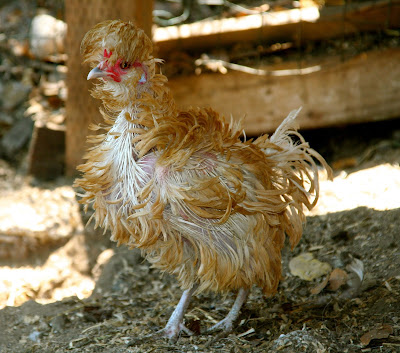 This is Fireworks. When we got her I thought she was the scrawniest, ugliest chicken I had ever seen and I found Owen's choice of a name darkly funny. I don't think he meant to be darkly funny. I think he chose "Fireworks" because she was orange and maybe because she looked like she'd just survived an explosion. She's some kind of bantam frizzle and she's very shrill and quick, always racing around and squawking.

She was so runty and hideous that I assumed she had to be a loser in all departments, including intelligence. When will I ever learn? All day I've been trying to think of a specific and dramatic example to illustrate Fireworks' cleverness, but it's hard with a chicken. I'll just say that on many occasions I've noticed her snaking a bread crust away from a bigger chicken or chasing off a crow. There is also the fact that she's managed to survive countless bobcat, hawk, and raccoon attacks on the flock. That's no mean feat. At this point, she may be our most senior hen.
Last night I got home at 10 and went straight down to shut the chickens up in their house. I found Fireworks pacing around in the run, muttering. Odd. All the hens are usually inside well before dark. Had she forgotten how to climb the ladder to the door? I picked her up, popped her inside the house, shut the door.
The door doesn't close cleanly and I fumbled with the lock for a nanosecond and when I couldn't get the rod to go through the slot, gave up because it was dark and I figured it wasn't a big deal. This is called cutting corners. I turned around to leave when -- BOOM -- the door flew open and Fireworks and the other bantam, Birthday, came screaming down the ladder. Slithering after them came a skunk. The skunk promptly sprayed and vanished into the night.

My point is this: freaky little Fireworks was the only hen smart enough to leave the house when that skunk turned up earlier in the evening. All the rest of the hens were up there thinking the skunk might be too full after eating all their eggs (which he had) to bother eating them. More likely, they weren't thinking at all. But Fireworks? So on the ball.

Of course, most of the hens were roosting on a pole a few feet above the skunk and because Fireworks doesn't roost she was in a particularly vulnerable position. But Birthday doesn't roost either and she was just hanging out with the skunk. Frankly, I think any hen, roosting or not, would have been wise to make herself scarce when that skunk appeared. As Brad Pitt said in World War Z, "Movement is life." Or something like that.

The other point is that sometimes you're rewarded for laziness. If I'd taken two seconds to actually lock the door like I knew I should, the skunk would have been trapped in the hen house all night and Lord only knows what I would have found in there this morning.

I just made this roasted broccoli with smoked paprika and almonds for dinner. It is fabulous and easy and you should try it.
Posted by tipsybaker at 7/02/2013 07:46:00 PM