No, it's MY broccoli salad 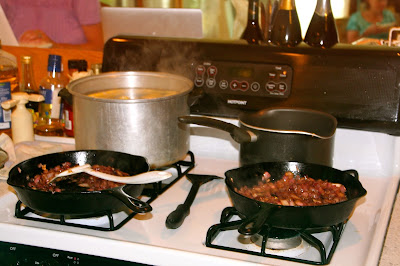 As mentioned in the previous post, I’ve been in Massachusetts at the beach house of my in laws along with dozens and sometimes scores of relatives and friends. There was an extended family potluck the other night to which I contributed a corn salad and a batch of s’mores bars.

The corn salad came from Ms. T at Food52 and I’d never made it before, but after glancing through the plethora of corn salad recipes viewable within 3 minutes on an iPhone while standing in a parking lot, Isabel chose this one. She is unerring in her snap judgments. This is a tomato-less salad that involves blanching the corn, scraping it from the cobs, and tossing with pancetta, cilantro, vinaigrette, and caramelized onions. The Shaw's in Wareham, Mass., didn’t carry pancetta so I used thick-cut bacon and added fresh mozzarella for heft and seasoned the salad very, very vigorously. It was delicious. Do the bacon and mozzarella make this my corn salad? Or is it still Ms. T’s?

Per Isabel’s request, I also made Anne Thornton's killer s’mores bars which I’ve made many times in summers past, always omitting the chipotle pepper.  Does the omission make them my s’mores bars? Or are they still Anne Thornton's?

While I was waiting for the corn to cook, my mother-in-law, worrying that there might not be enough food at the potluck, said, “I think I’ll make my broccoli salad.”

Because she first tasted the Smitten Kitchen broccoli slaw at my house, I said, “Wait! That’s my broccoli salad!”

She said, “I’ve made it more times than you have.”

I started counting in my head the number of times I’ve made the salad but realized I was acting like an 8-year-old and ceded her the broccoli salad because: mother-in-law.

And because: who cares. These are all three fantastic recipes and you should make them.