Where did the last week go? Have I been busy? I sure hope that's it.

On Memorial Day I made Texas barbecued brisket. Here's Steven Raichlen, author of The Barbecue Bible, on the subject of brisket: "Pit masters spend years learning the right combination of smoke (lots), heat (low), and time (measured in half days rather than hours) to transform one of the toughest, most ornery parts of the steer into tender, meaty perfection."


As my father used to say, Whoa there big horse. Raichlen makes barbecued brisket sound like an epic feat requiring years of study and the brawn of a bull rider. Yet somehow on the very first try I wrestled the toughest, most ornery part of a steer into tender meaty perfection. You could do it too. It wasn't hard. Making tuiles? That's hard.

I hesitated to mention how easy this brisket really was, as barbecue has a mystique that many of us cherish. We like the idea that the best tasting barbecue can only be made by an old redneck with a drawl and cheekful of chewing tobacco. An elderly black man also works. A woman? No. Women should be off in some kitchen baking pie or something. It's sexist, but as sexism goes, benign. There's little enough romance in the world and maybe I'm just making it worse by demystifying barbecue, so I won't. I'm SURE old men in Texas make far better brisket. But the brisket I made was still really good.

Here are the basics: Start with an 8 pound brisket and the night before you cook, rub the meat with seasonings: chili powder, cumin, black pepper, coarse salt, sugar. Refrigerate. In the morning, as early as you can get up, start the barbecue (a few smoldering coals, a chunk of soaked mesquite) and place your brisket on the grill. Cover and stick a long-stemed thermometer in the vent and try to keep the temperature between 180 degrees and 220 degrees F until dinner time, replenishing coals and mesquite as necessary. You'll need to check every 30 minutes or so.


As Chris Schlesinger and John Willoughby write in Thrill of the Grill: "Obviously the key here is a tremendous amount of patience and a day when you want to do nothing but sit around. .  . Put the top on the cooker, pull up a chair and grab the cooler."

There we ago again with the manspeak. Women just don't grab coolers. We have other vices.
Anyway, you slice the brisket against the grain and serve with barbecue sauce and whatever else you like. In the picture the brisket looks burnt, but it's not. The spices and sugar caramelized to form a dark crust. You could see the succulent meat through the cracks if you got close up.

About the rest of the meal:

-I tried an excellent recipe for coffee-laced barbecue sauce from Smokestack Lightning that included ketchup, hot sauce, Worcestershire, vinegar, brown sugar, and instant coffee. Smokestack Lightning is a fun book and if you're ever planning to travel around the South visiting barbecue restaurants, you should track it down.

-Ginny Lee alerted me to a fantastic cole slaw recipe. I've been making the same mayonnaise cole slaw for 15 years, but this is what some people would call my new "go to." I do think the dressing can handle more cabbage, so I wouldn't stop at 1 1/2 pounds.

- For the second time in a month I cooked the baked beans from Make the Bread, Buy the Butter and for the second time in a month thought they were too spicy when I first tasted them and then perfect a few days later. What's going on with that? I used pinto beans and now prefer them to navy beans. Bigger, softer, more velvety. I also call for an apple in the recipe, but omitted it because we didn't have one and nothing was lost. In future, no apple. Recipes can always be streamlined, augmented, and clarified and these are changes I would make in the book if I could. 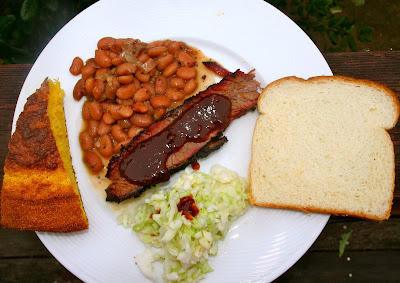 - For dessert: rhubarb pie from Nancie McDermott's indispensable Southern Pies. With two small adjustments this should be the perfect rhubarb pie recipe and I will post when confirmed.