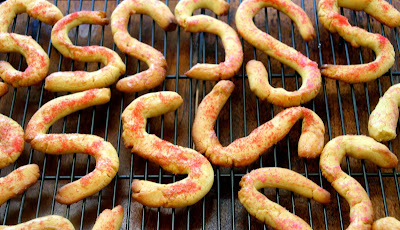 I have some new carrot soup recipes to try. Thank you!

But I won't be making carrot soup or anything else this weekend because the refrigerator quit on Thursday. Freezer too, which was a big old mess. This morning it was actually warm inside the fridge, making it the ideal place for rising bread. Smells terrible. Almost everything had to go except mustard, jam, and yeast. It was hard to part with that prosciutto, let me tell you. No repairman until Monday.

Looking on the bright side: clean refrigerator, clean slate, new leaf, will have to eat out some this weekend.

The other day I made "s"-shaped butter cookies out of The Cooking of Germany. They contain sugar, butter, flour, and only the yolks of eggs. They're very rich and dense and we like them. Each cookie is filling, like a meal, like a cookie you'd take on a backpacking trip through the Black Forest. My only quarrel with the recipe is the addition of lemon zest. Even a little lemon turns a butter cookie into a lemon cookie and that interferes with something deep and mellow and boundless about the flavor of butter. It's not that I don't like lemon, but sometimes I want to hear what quieter flavors have to say.

The addition of lemon was one of my two complaints about Nanci McDermott's rhubarb pie recipe from Southern Pies. I made it a few weeks ago and it was almost perfect, but there was this hit of lemon that kept getting in the way of the rhubarb. Also, there wasn't enough fruit for me; the pie seemed flat and underfilled. So I made it again adding more than twice as much fruit, doubling the sugar and thickener (flour,) but omitting the lemon. This time it was perfect in all ways except: 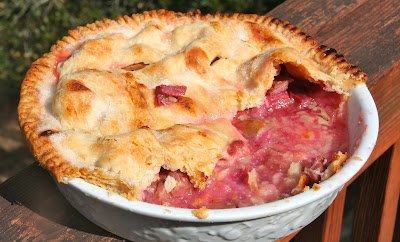 Can you see how soupy? You need a spoon to eat it. Layne suggested pre-cooking the filling so that's what I'll try next. I have to keep on with it, because I wrote "perfect rhubarb pie" down on my list.

About the list. Everyone has their own way of keeping track of life and mine is a crazy list that I retype every year and add to constantly with hand-written notes. I've kept it going for at least 15 years. It is many pages now, full of books I want to read, movies someone recommended, donut shops I "need" to visit, people to call, projects to finish, medical tests to schedule, chores involving the goats (see below), clothing items to mend. It sounds unwieldy, but works for me. I flip through it every day and every time I get to this page I stop for a split second. 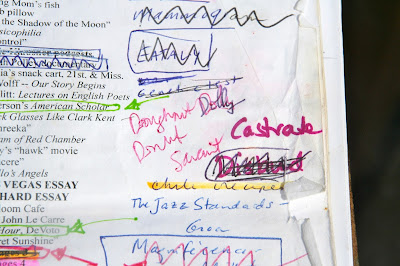 By coincidence, we are about to go as a family to Doughnut Dolly and Donut Savant as there's nothing to eat in the house and no milk for coffee and it just feels like the morning.
Posted by tipsybaker at 6/15/2013 08:24:00 AM