On Tuesday, I am scraping Nigel Slater's revolting duck, marmalade, and turnips casserole into the garbage and mentally composing my resignation letter from Project Tender.

On Wednesday, Owen and I are eating Slater's braised oxtail straight out of the pot an hour before dinner because it is so hideously delicious. And I do mean hideously.

His recipe for prawns with limes and leaves didn't work at all.

But his beef stew with onions and beer may have been the best beef stew I've ever made.

His apple marmalade tart was unusual and surprisingly tasty, especially the thick shortbread crust of which I ate far too much.

But the beet seed cake was a dry brown lump.

Although the batter was pretty. What happened to all that pink? 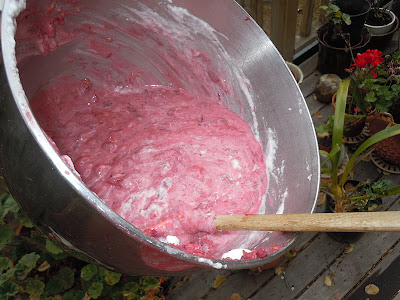 Slater may in fact be cosmopolitan and polished, but I picture him as a hobbity eccentric in a cardigan and soft-soled shoes who futzes around a thatch-roofed cottage scooping marmalade into his pot of braised duck, currant jelly into his stew, and grated beets into his cakes. He is definitely weird. I like that. Sometimes his freaky ideas work and sometimes they are just horrendous, but interacting with this book is always interesting. I've never had a cookbook experience quite like this one.

I'm sticking with Tender, but I'm also going to start cooking from both the Food52 cookbook and Eat Good Food because they're my other new cookbooks of the season and they're full of appealing recipes. No need to live in a straitjacket.

A reminder: I will be reading and signing Make the Bread, Buy the Butter, at Book Passage in Corte Madera, California on Saturday at 1 p.m. It would be great to see you there.
Posted by tipsybaker at 11/09/2011 06:57:00 PM