Behind the green (room) door

On Monday, to promote Make the Bread, Buy the Butter, I appeared on 7Live, a local afternoon TV show. There was no fretting about wardrobe for this television appearance, my second, as I can only fit into one outfit right now: black J. Crew cords, black shirt. I came with props (food) that we set up on a long wheeled table backstage. Then the producer's assistant escorted me to the green room.

For all you mere mortals, I will describe a local TV station green room. 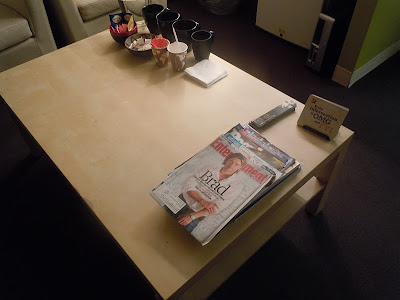 Imagine a tiny, windowless burrow with a television on which is playing a soap opera. There are some out-of-date magazines (but good ones!), a tub of pinkish face powder, a soft sofa, two soft chairs, a mirror, a coffee machine, and a massive tray of food. No straight bourbon such as Michael Ruhlman describes appearing in Martha Stewart's green room. Boo. But there is a wide array of tasty packaged snacks that Martha would never countenance, like Nutter Butters and Teddy Grahams. I eat two Hershey minis and a granola bar. Drink coffee. Take a picture of myself. Read about Kate Gosselin. Hyperventilate. Drink more coffee. Read about Brad Pitt. Hyperventilate.

Other guests eventually join me in the holding cell. I mean, green room. Specifically, the embattled authors of a self-published novel called Tales from Swankville that takes place in Pleasanton, California. Tales from Swankville has, I learn from the very nice authors, infuriated various thin-skinned citizens of Pleasanton who feel they have been depicted in an unflattering light. The uproar is why the authors are appearing on 7Live. I am now tempted to read the book.

There is a lesson here: If someone depicts you in an unflattering light in their self-published novel, don't make a big, ugly fuss. Because if you do, they may go on TV and everyone will suddenly want to read the self-published novel in which you are depicted in an unflattering light.
The appearance was quick and fun. Lizzie got the name of my book wrong and I had to make a split second decision about whether to correct her. Didn't. Don't regret it. No sooner had I made my last witty remark than they had me out on the curb, packing my stuff in the car. Slam, bam thank-you. . . except no one said thank-you. Hey! That's no way to treat an authoress!

Kidding. It was fine. I was giddy for about 15 minutes and then crashed. Came home totally drained, good for absolutely nothing for the next 24 hours except to drink wine and wander glassy-eyed around the internet looking at shoes. Not Christian Louboutin. Neither my style nor my price range,
On another subject, Natalie came into heat today and the instant I noticed the "symptoms" I dragged her into the car and drove up to Split Rail Farms where she reconnected with Kentucky, the sire of Sparkles. She's spending the night and will return tomorrow. Sparkles, meanwhile, is undone by the absence of her mother. It is dark and she's wandering around the yard, crying loudly. Good times.