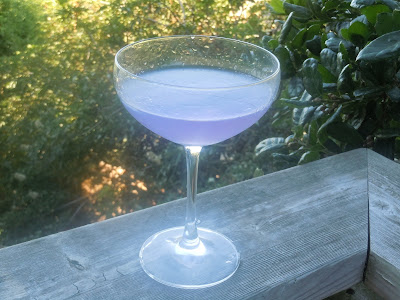 Q: Wow. That is one gorgeous drink. What is it?

A: Isn't it lovely? It's called an Aviation and it contains gin, maraschino liqueur, lemon juice and something called creme de violette that renders it lavender. Steve Martin describes this cocktail in his novel Object of Beauty and I've been obsessed with trying it for the last week.

Q: Who cares, so festive.

A: I am sitting on the sofa beside my son who is watching Phineas and Ferb and it feels not very festive. Today I had to replace my falling-apart jeans and that required much self-scrutiny in the harshly-lit mirrors of Macy's, Sundance, and J. Crew. So, I decided to skip evening spin class, buy a bottle of creme de violette, and try a new cocktail.

Q: How's that approach to dieting and discouragement working out for you?

A: I don't think that's a nice question. 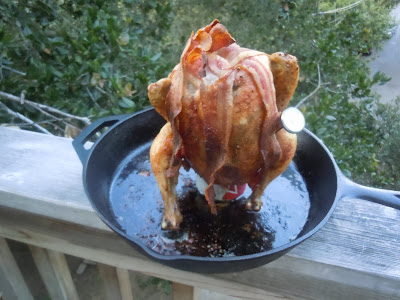 A: I've been moving slowly and doubt I 'll get very far. I do like Guy, but his recipes are mostly gimmicky and only moderately delicious. The other night I made his version of beer can chicken. You heavily season the chicken, impale it on an open beer can, and pop it in the oven. The beer supposedly evaporates and keeps the bird moist, while the outside crisps up. Fieri's twist is to drape bacon over the skin.

Q: And that wasn't awesome?

A: It was fine, but I would not go so far as "awesome." Plus, I had to buy a whole 6-pack of Bud. Our supermarket doesn't sell singles.

Q: Quite a change of pace from Heidi Swanson.

A: I know. I miss Super Natural Every Day. Not a lot of vegetables in Fieri's book. I was very hopeful about the Bomb Bakers (recipe is here) but they were not a hit. 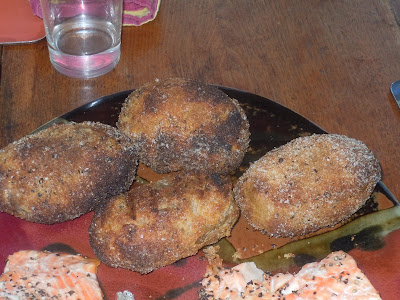 You brine the potatoes for 8 hours, roll them in oil and Lawry's seasoned salt, then roast them for an hour. I was very curious about brined potatoes, except to me they just tasted like baked potatoes with inedible, salty skin.

On the other hand, I loved Guy's pork blade steak piccata. Recipe is here.

Q: What's on the table tonight?

A: Bloody Mary flank steak. It's been marinating in V-8, vodka and a lot of other stuff for the last 24 hours.

Q: On another subject entirely, how's the little goat?

A: Wild and impish and she charges at the chickens. We're petting her lots, but pretty soon we're going to need a lasso.

Q: Are you liking the Aviation better now that you're getting to the bottom of the glass?