At least it wasn't Twinkle 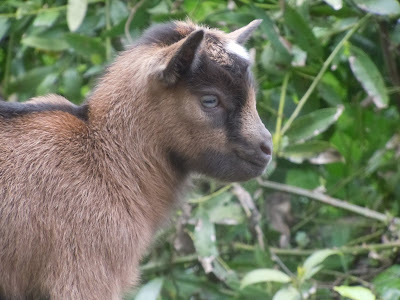 The other night, I cooked Guy Fieri's lamb chops with mint pesto, my maiden voyage into Guy Fieri Food. They were excellent. I wish Guy didn't try so hard, what with the tats and the slang and the Phyllis Diller hair, because I think he has good ideas and sound recipes and all that shtick just makes him seem insecure. But I guess shtick is required these days to become a Food Network star.

It seems tasteless to post a photograph of lamb chops adjacent to a photograph of a baby goat, so I'll skip right to Fieri's chicken-under-a-brick, which I served last night.

To make this, you spatchcock a chicken and season it well, then heat oil in a skillet, splay the chicken out in the hot fat, and top with another skillet weighted down with four foil-wrapped bricks. 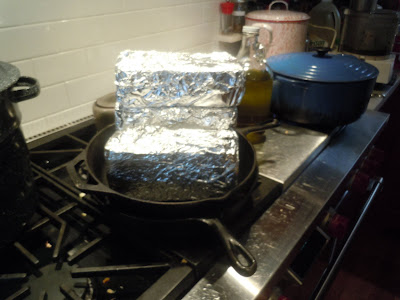 Roughly thirty minutes later, the chicken looks disturbing, but tastes wonderful. Serve with green sauce.
Does anyone watch much food TV? Favorite shows? The other day, Owen and I watched Anne Thornton make s'mores bars on a program called Dessert First. It's sort of stunning that shows are devoted to recipes this remedial, but still, we watched. When it was over, Owen said, "Mom you HAVE to make those." 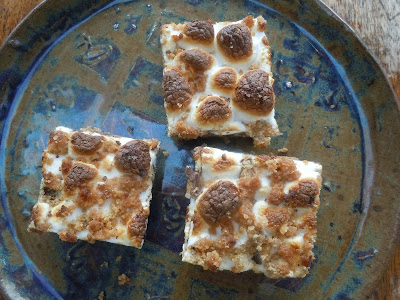 And they were insanely good. One of those desserts -- buttery, a bit salty, crumbly, chocolatey but not overwhelmingly so, crunchy, gooey -- that you can not stop eating. You just want more, more, more. I have a problem with this kind of dessert as there's no built-in stopping point. Satisfaction is impossible. But I would be derelict in my blogging duty if I didn't tell you that the recipe is absolutely phenomenal. (I omitted the chipotle powder, as Thornton does on the show. Come to think of it, chipotle powder might make these easier to stop eating.)
Posted by tipsybaker at 6/06/2011 09:49:00 PM