Any resemblance to persons living or dead is purely coincidental 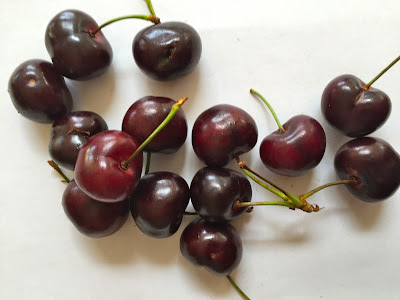 The couple agreed on a lot of things, maybe even most things. They agreed about religion and they agreed about politics. They were both punctual to a fault and didn't care that their cars were held together (literally) by duct tape. Neither of them liked camping or theater, both loved road trips, Wyoming, donut shops, used bookstores, clam shacks, and the fifth season of Girls. He made her laugh all the time. She made him laugh when she sang. They tried to live by the Golden Rule and expected the same from their children. You could say they shared the same values, at least when it came to the important stuff.

Or should we say “important” stuff.

One fine May morning, the wife walked into the kitchen and found her husband at the counter cutting beautiful, big, sweet, crunchy cherries she’d bought at the farmers’ market into little raggedy pieces. He put these sad cherry filets into a Tupperware container for inclusion in their son’s lunch bag.

What a tender and caring father, thought the wife, to make his 15-year-old son’s lunches.

And what a barbarian, thought the wife, to cut gorgeous cherries into limp pieces.

He probably didn't know any better. After all, he hadn't been raised in a fruit-worshipping household as she had. She decided to treat this as a teaching moment. Gently and benevolently, she said, “You know, you shouldn’t cut up the cherries. It ruins them. They lose all their crunch.”

The husband, whose favorite fruit might well have been the banana, said, “Ok. I didn’t know that.” He finished cutting up the cherries and snapped on the Tupperware lid.

The rest of the day passed peacefully.

The next morning, the wife went into the kitchen and there her husband stood at the counter making their son’s lunch again, mutilating cherries.

“What are you doing?” the wife cried. “I told you yesterday, cherries are supposed to be kept whole.”

“I heard you,” said the husband.

“But you’re ruining the cherries!” the wife said. “And you’re sending the message that cherry pits are a huge when they’re not! You’re turning our child off to cherries!”

Possibly she sounded a bit shrill. One would have to ask the neighbors.

There was a hard, warning edge to his voice, an edge the wife didn’t hear often but knew she should heed. Still, the wife would have pushed it. A tendency to push it was one of her very few character flaws. Mostly, she was perfect. Mercifully, at that very moment the wife’s sister called. The wife left the kitchen and whispered her frustration about the cutting of the cherries to the sister, who shared her dismay. Or pretended to. The sister agreed that yes, it was wrong, like someone putting an ice cube in a glass of great red wine or ordering a dry-aged New York steak “well done.”  The conversation calmed the wife, who did not renew her ridiculous argument with the husband about the cutting of the cherries, even though she knew she was 100% in the right.

But the wife’s thoughts kept wandering back to the cherry contretemps. It was funny that a couple would fight about cherries. Not money, not sex, not Sanders vs. Clinton, not laundry, not the remote control or asking for directions or self-destructive habits, but cherries. It seemed to her that in twenty years of marriage she and her husband had basically fought just one fight, over and over again. Broadly speaking, it was always about cherries. That is to say, it was always about the proper role of eating in daily life. Even when an argument was about chickens or goats or the garden, it was somehow about the proper role of eating in daily life. The wife cared a lot about cooking and food. In fact, she was preoccupied by cooking and food. The husband wasn’t. In fact, he was actively hostile to food. When they were courting, he had said that he wished he could consume nourishment in a pill -- and she had found this bizarre, but charming. At the time.

Were they ever going to stop bickering about cherries? The wife couldn't see how. They'd both dug in their heels. While cherries weren't going to end their marriage, there was no question cherries made their marriage slightly less delightful.

On Sunday morning, to the wife’s surprise, the husband asked if he could join her at “the fruit fair,” which was his name for the farmers’ market. The husband almost never accompanied her to the fruit fair. He would glower at the prices and the silly people who exulted over dainty little bunches of organic baby carrots. What was wrong with the 5-pound bags from Safeway? The fruit fair could ruin the husband's day.

But if he wanted to subject himself to the fruit fair, the wife was happy for his company. It was a beautiful morning and the fair was crowded with people carrying baskets and pushing strollers and tasting blueberries. The couple strolled past the organic creamery and the goat butcher, the honey guy, the waffle truck, the organic apricots and peaches and the crates of Little Gems lettuces and basil. They talked about their children, who, they agreed, were both shaping up nicely. They talked about what movie they should see later that day and chose Maggie’s Plan. They decided they would like to go to Mexico City for a long weekend, but not this summer. The wife did notice that her husband periodically vanished. When she would turn around to ask if she should buy some strawberries that she'd been hovering over, he would be gone. A minute or so later, he would reappear and take any bags she might have acquired.

Finally, she asked him where he kept wandering off to.

“I walk away whenever it looks like you're going to pull out your wallet,” said the husband.

He did not say this in a sarcastic, accusatory way. He said it in a calm and kindly way. He seemed to be in an extremely good mood.

It hit her suddenly, the way it did from time to time, what a good man she had married. As much as it annoyed her when her husband cut up cherries and filled the freezer with Steak-Umms and made caustic jokes about the meals she cooked, it had to bother him just as much, perhaps more, to see her lavishing money on wild salmon, a curry leaf tree, white corn, organic pea shoots, cookbooks, preserved lemons, and so on and so on, year after year after year, a river of precious cash flowing into the pockets of people producing things like Vita Mixes and sunchokes and mizuna, the purpose of which he would never in this lifetime understand. Never.

When she looked at things from his point of view, she shuddered.

But there he was in his baseball cap and Birkenstocks, amiably carrying bags of expensive foodstuffs that she wanted and he absolutely didn't. By simply wandering away when it looked like she might pay $6 per pound for Utah giant cherries, he had figured out how to keep his cool. Couldn't she find a way to hold her tongue when he cut those cherries up into little pieces for their son’s lunch. Yes. Yes, she could. Of course she could. They could get past the cherry fight and this was how. It was all about quiet acceptance and accommodation. She’d seen the light!

Unfortunately, one of the depressing lessons that it had taken her decades to learn was this: You keep having to see the light over and over again. The same light.

But for now, this week, this spring, she could see it. And on the following Wednesday night when he made a caustic remark about the delicious riced cauliflower with pumpkin seeds and goat cheese she’d served for dinner, she just smiled.
Posted by tipsybaker at 6/02/2016 11:27:00 AM