I’d long been curious about durian, the famously smelly Southeast Asian fruit, but never quite curious enough to taste one. David Quammen’s description in his book Spillover pushed me over the edge. He eats durian with a bat researcher when he’s visiting Guangzhou and describes the experience with relish:

“It is a large spiky thing, a durian, like a puffer fish that has swallowed a football; pried open, it yields individual gobbets of glutinous creamy pulp, maybe eight or ten gobbets per fruit, and an unwelcoming bouquet. The pulp tastes like vanilla custard and smells like the underwear of someone you don’t want to know. We ate barehanded, slurping the goo between our fingers as it oozed and dripped. . . .”

I could not get to the Chinese market fast enough.

More about the durian from The Oxford Companion to Food:

“'Duri' is the Malay word for spike, and the tree takes its name from the hard, spiky shell which the fruit develops. A full-grown fruit may weight 2 kg (5lb) or more. Since the tree may be as high as 30 meters (300') and the fruit drops off when ripe, it is wise to take care when walking near such trees in the durian season. Death by durian is not uncommon. Another hazard at this time is the appeal the fallen, split fruit has for tigers. . .”

I paid $35 for my durian at the Richmond New May Wah and the cashier wrapped it in some Chinese language newspaper. It was already cracked and appeared fragile, so I carried it carefully in my hands to the car. According to The Oxford Companion, people have compared the aroma to “sewage, stale vomit, onions, and cheese,” which is why the fruit has been banned from trains and buses in places like Singapore.

Exciting! But in my small car on a hot afternoon I could smell nothing but a faint, fruity perfume that wasn’t at all unpleasant. Was something wrong with my sense of smell? I held the durian up to Owen’s nose when I got home. He didn’t smell anything either. I googled “odorless durian” and read that scientists have figured out how to breed the aroma out of the fruit. I must have ended up with one of the odorless durians. So disappointing. Like getting a bottle of mezcal without the worm.

I pulled open the durian with my hands along the cracks in the shell. It’s divided into sections, each one with its lobe of soft, sickly yellow flesh. How did it taste? “Vanilla custard” is too kind, not to mention off the mark. My durian was sweet, but there was something in the flavor that kept it from being entirely fruity. Something assertive, sour, and vegetal. Slightly fermented. It was reasonably tasty and the texture was pleasantly creamy. The only thing I found off-putting -- and I found it very off-putting --  was the larval appearance of those pale, wet lobes. The word that kept springing to mind was “grub." 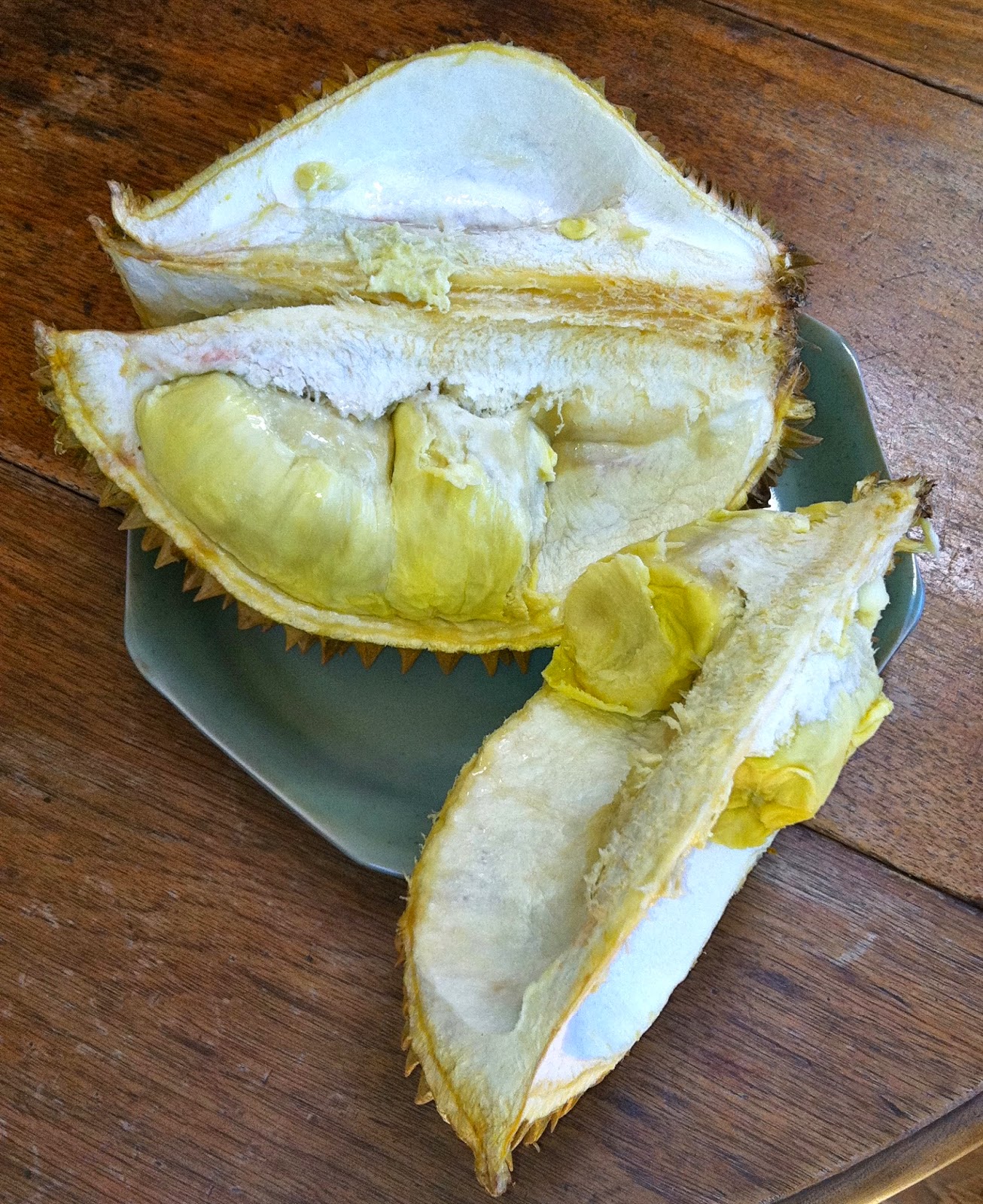 Having read a bit about durians, I now know that there are different breeds and flavors and mine may not have been of the finest quality or at the optimal ripeness. Having tasted just one durian, I’m not a hater, but I’m not a fan. Not yet, anyway. According to The Oxford Companion, the 19th century British naturalist Alfred Russel Wallace loved durians so much that he wrote: “To eat durions (sic) is a new sensation worth a voyage to the East to experience.”

Labels: durian
Email ThisBlogThis!Share to TwitterShare to FacebookShare to Pinterest