Yesterday I posted about The Homesick Texan's pumpkin empanadas (good) and carnitas (great) and my new prescription reading glasses (life changing) and two people commented, one of them praising the photo of the empanadas and the other telling me I was "too funny." Thank you. Both those comments made me happy. This morning I did something stupid and the post is gone. Here's the link to the carnitas recipe. You should try it. That's the big takeaway from the lost post.

Also, here's the grapefruit desserts story I was working on last month. Maybe I'll do a sequel after I make grapefruit tart, grapefruit souffle, grapefruit pudding, and grapefruit curd. I just couldn't squeeze them all in before the deadline.

Ok, back to The Homesick Texan, which I obviously love. Lisa Fain's seven chile chili might be my favorite dish in the book. Is it outstanding chili or do I just love chili? I don't know. But we ate it last night and it was a smash hit.

Fain offers two chili recipes in her book. I made her one-hour chili for the frito pie and as the name suggests, it's a quick and easy ground beef concoction. We've all had a variation on that chili before and it's fine. This second chili is a heroic production that begins with a trip to the Mexican market to try to track down ancho, pasilla, guajillo, chipotle, pequin, and arbol chiles. (The seventh chile is powdered cayenne.) Then you need to chop a 4-pound hunk of beef chuck into 1/4 inch pieces, an experience I enjoyed about as much as getting my eyes dilated. After that you cook the beef with the chiles for roughly 6 hours until the mixture thickens. It's incredible looking stuff, this chili, dense, iridescent, almost black. I doubt it matters that you use every single variety of chile she lists, but it's fun to imagine it does. Recipe for monumentally delicious chile is here.

For dessert I made Fain's chess pie, which has some issues, starting with the name. 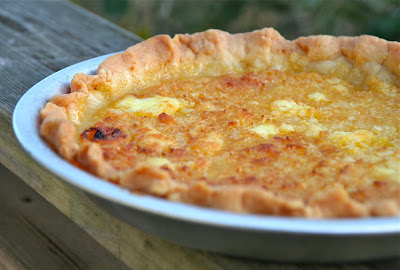 I would call this lemon chess pie, because it contains 1/2 cup of lemon juice plus zest and it tasted like lemon pie, whereas plain chess pie tastes like sugar and butter. But it's her pie and she can call it what she wants. She doesn't tell you what size pie plate to use so I assumed 9-inch, the most commonly used size, and that worked perfectly. I was skeptical of her crust recipe, which comes from her grandmother and was suspiciously uncomplicated. You essentially just stir flour, salt, vegetable oil, and milk in a bowl. No chilling the bowl, no rubbing fat into flour with your fingertips, no home-rendered lard, no vodka, no ice water. And it's a superb crust. Not flaky, but crispy, tasty, absolutely great. I think maybe we get too worked up about pie crusts.

But the biggest issue with the chess pie was my apparent failure to mix the filling until "creamy and well-combined" and while the pie was baking clumps of leathery egg white floated to the top. You can see them in the picture. Blecch. Very unappetizing when you bite into one by accident.

Otherwise? Delicious, delicious lemon chess pie. The recipe for both crust and filling are here.