A bunch of crying babies around here 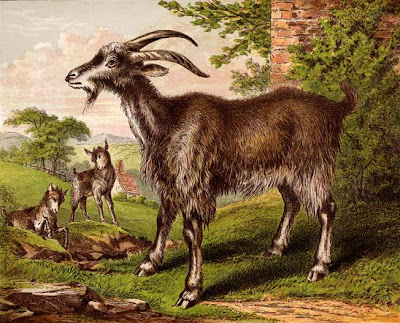 This outstanding recipe for cajeta (a.k.a. dulce de leche) is adapted from My Sweet Mexico by Fany Gerson.

1. First you will need a goat. Can I give you one of mine? In fact, I will give you all of mine. Think of the cajeta. Mmm, cajeta.

2. Milk the goat until you have a quart of milk. No need to pasteurize, though straining is always a good idea. Put the milk in a pot with 1 cup sugar, 1 tablespoon light corn syrup, a big pinch of kosher salt, and the seeds and pod of a vanilla bean. Bring to a boil. Remove from heat.

3. Dissolve 1/4 teaspoon baking soda in 1 tablespoon water. Stir into the milk mixture. Return the pot to the stove and simmer gently for an hour or so, stirring occasionally, until you have a thick caramel sauce. Pull out the vanilla pod, lick clean, discard. Pour cajeta into a jar. Eat with a spoon, spread over crepes, drizzle on ice cream. Store in the refrigerator.

This a cajeta so superior you will never think of putting a can of condensed milk in a pot of boiling water again. I have done that many times and while the can never exploded, the cajeta was never this delicious. Gerson says you can use cow's milk for this recipe, but that "the goat's milk has a distinctive grassy, musky flavor. . . "

Don't you want a goat now? I think you do.

Thanks to Oz for the suggestion. 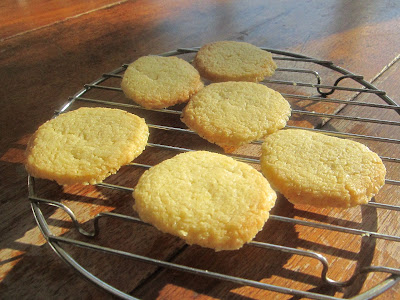 I made Fran Gage's vanilla bean shortbread this week, and the cookies are lovely, but more fragile than these cookies from Food52 which I made a few weeks ago and which are very similar in flavor. Make these. They're fabulous. My only change to the Food52 recipe would be to omit the colored sugar topping, but if you have children or really want sugar topping, try dipping the bottom of the juice glass in water. Also, let the cookies rest for 2 days. They got better. They got dangerously better.

We were busy this week, so not much other cooking happened, and what little did was not from Bread and Chocolate. It's a tiny boutique of a book and doesn't have dishes for every occasion. My cousins Luis and Ana Maria came to dinner on Friday, and they are in their seventies, Guatemalan, and gastronomically conservative. I couldn't see feeding them Fran Gage's oyster stew or crayfish gazpacho and Ana Maria is gluten intolerant, so the pasta with saffron cream sauce wouldn't work, though it sure sounds good.

Instead, I turned to The Essential New York Times cookbook and made the chicken country captain which was a dream, mostly because it was easy, but also because it was delicious. (This is not the exact recipe, but it is very similar.)  I served the chicken with salad, the so-called perfect pot of rice (also from NYT book) and caramelized endives. Very happy with the meal, though I realized afterwards that I had dredged the chicken with flour, which I hope did not make Ana Maria sick.

Getting back to goats. I try to be mostly honest in this blog, so I will say that lately the goats have had a disastrous effect on my mood. At least I think it's the goats. I feel exhausted and blue and that my life is out of control and everything is too much for me. Which is funny, because rarely has my life been so under control.

Except there's this. Every morning at 5:15 Sparkles has a noisy tantrum. It's like she feels exhausted and blue and that her life is out of control and everything is too much for her. The sun comes up and she looks around and sees that her kids are needy and misbehaving and why is this yard such a mess? Where's the grain? Who overturned the water bucket? Why is her irritating half brother still humping his sister even after he was emasculated? Gross. Calgon, take her away! So she starts yelling.

I get out of bed, prepare milking ablutions, put on manure-caked Crocs, go outside, give Sparkles grain, milk her, right the water bucket, and restock the hay. She settles down, but because now I'm up, I milk Natalie, let the chickens out, and rake the compost pile. If I lived in the country, I would roll over and let Sparkles holler. But we have neighbors.

Then I come inside. By now it's 5:45 a.m. and my husband is grumbling because the goats woke him up and I notice we're out of coffee and what the hell am I going to do with all this goat's milk? Jeez, this rug is filthy. I can't live with it one more day! But of course I will. Gosh, I wish Owen had friends, even though he seems happy enough. . . oh no. NO! Sparkles is yelling again.

And I want to have a tantrum of my own. Sometimes I do. Ask my poor husband.