It's Istanbul, not Constantinople

On Sunday, Owen and I picked up my grandmother and told her we were going to an Ethiopian restaurant. She seemed unclear about exactly what cuisine we were talking about. "Indian food?" she asked. When we got to the restaurant she looked around at the people and said, "Oh, this is an Abyssinian restaurant."

I stopped myself, checked on my iPhone, discovered she was right. Or at least not wrong.

My grandmother did not like eating with her hands, and did not understand the role of the injera -- the spongy flatbread you use to scoop up the various dishes -- until about halfway through the meal. Lightbulb moment: "This a tortilla," she said.

I said, "No, no, it's actually a sourdough pancake made with teff flour. . ."

She looked at me darkly. "I know. But it's like a tortilla." After that she ate with gusto. My grandmother is a pip.


Zeni is the best Ethiopian restaurant I've been to in the Bay Area, and I'm just sorry it's in San Jose, where I hardly ever go. The injera comes in a basket and it is rolled up tightly, like hand towels. See lower left-hand corner of photo below: 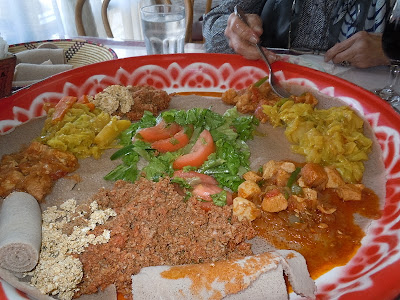 It is pliable, grayish, slightly damp, intensely sour, so good. I am determined to learn to make it, or something like it. To go with the injera, we had super-spicy ground meat, homemade cheese, chicken sauteed in butter, cabbage sauteed in butter, salad, all delicious. One order of baklava for dessert, which I would have skipped, but my grandmother insisted.

I thought about how and what my grandmother eats. It's very simple: She eats everything, including wine, salad, and dessert, but everything in moderation, at mealtimes. It makes me think of the Michael Pollan maxim: Don't eat anything your great grandmother wouldn't recognize as food. That strikes me as the soundest of all dietary advice.

The recipe comes from the The Africa News Cookbook and you start by simmering butter with spices (ginger, turmeric, cardamom, etc.), onions, and garlic for a full hour. Then you strain out the solids -- both dairy solids and bits of spice and onion -- so that you're left with pure golden butter imbued with a subtly exotic fragrance. It's beautiful. You'll want to dip a crust of bread in it, but try to resist.

Once you have your spiced butter, steam some cauliflower, broccoli, carrots, and potatoes, then saute them in 1/3 to 1/2 cup of the butter. Salt to taste.

Last night, I made Algerian spicy vegetable soup (chorba hamra), also from Africa News. I will have to write more about this soup later because I didn't really eat any so can't comment on its flavor. I just left the pot on the stove for my husband and went to meet a friend of a friend for a drink. There, in the Marinitas bar in downtown San Anselmo, I consumed so many tortilla chips that I didn't feel like eating vegetable soup when I got home at 8:30 p.m.