Good things come in twos and so do other things 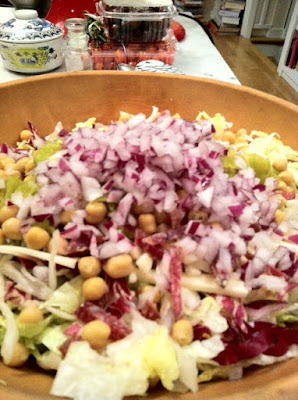 1. Nancy's chopped salad. Envision (or just look at the picture above) a mountain of chopped iceberg lettuce, radicchio, red onion, salami, aged provolone, and chickpeas tossed with an oregano vinaigrette. One of the few salads that not only survives, but improves overnight. It does lose crunch and starts to resemble sauerkraut, but it tastes zestier on day 2 than on day 1. Which is good because there was lots left over. Husband: "How many does this serve?" Me: "I think four." Isabel: "Four elephants?" Yes, my saucy daughter. And now it is all gone. What does that tell you? The recipe is here, although the online version calls for twice the quantity of cheese and salami as the version in the book. I think 4 ounces of each was plenty and healthier.

2. Little gems with gorgonzola and dates. I separated all the little gems (found at Whole Foods; like tiny heads of romaine) into individual leaves to wash them, and then it turns out the salad was supposed to be made wedge style, with the leaves not separated. Forged ahead. Tossed the leaves with an incredibly decadent and copious dressing made from yogurt, buttermilk (I used milk), thyme, sherry vinegar and huge chunks of gorgonzola. Served with a few thinly sliced dates. The combination of the sweet-jammy dates, creamy-salty gorgonzola, and crunchy-refreshing lettuce: crazy genius. (Too much dressing though; you can make this salad three times over with the quantity Silverton's recipe produces.) The recipe is here. Try it. Small portions.Very rich.

Two obstacles to full engagement with the glories of Mozza this week:

1. We have two ovens and both of them are broken. The parts have been on order for a month. This eliminates about half the recipes from Mozza, including the veal stracotto, walnut biscotti, and pizzas. Of course that leaves the pastas and the Greek yogurt gelato. Except. Except. Except.

2.  Sheepish about this because I have always thought they were ridiculous and have been opposed philosophically and emotionally, but I am on a reduced carbohydrate diet right now and have to eat my words because I like it and it is working. I was not screwing around when I started a diet back in December, and when the militant calorie counting/exercise yielding dismal results, I changed tactics. Not Atkins or South Beach, just zero starch (grains, potatoes) or processed sugar and almost zero alcohol. A modified version of this. I'm not doing his bizarre exercise program (although I'm curious about it) and he doesn't endorse gorgonzola or salami, not to mention oil, so very modified. Also, he says to eat 10 servings of vegetables per day and I am incapable. I am not, after all, an elephant. More to say about the diet in the future. Prepare yourselves.

Anyway, this is why I am not throwing myself at Silverton's gnocchi with chanterelles or her goat cheese and bacon pizza or her coconut sorbetto. One day I will, although it looks like I'll have to be altogether more moderate going forward than in the past.

Two movies I dread, but will probably see:

1. Albert Nobbs. The preview is a complete turnoff, but then there's this.

2. Melancholia. Kept putting it off. Now someone in the house is insisting.

Labels: Mozza
Email ThisBlogThis!Share to TwitterShare to FacebookShare to Pinterest