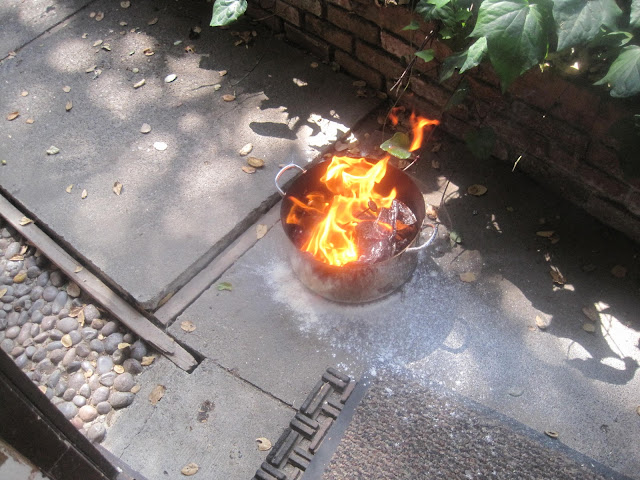 The fire was not his fault. I was so proud of my stovetop smoking method -- developed and "perfected" over several months during which I smoked many batches of pastrami and Canadian bacon -- that I was going to unveil it in the blog today. Now I think I'll wait until I've ironed out some of the kinks. For the record, Stowell recommends smoking bacon in a smoker.

Anyway, I smoked one batch of Stowell's bacon successfully on the stovetop and then with the second batch, I foolishly turned up the heat to super-high, left the room, came back to the fragrance of barbecue, opened the pot, allowed some spattering of fat and . . . you can see. It wrecked the pot, wrecked the bacon, and did not want to die, that fire. I poured all our baking soda on it and after that an entire bag of flour and only then did it sputter out. 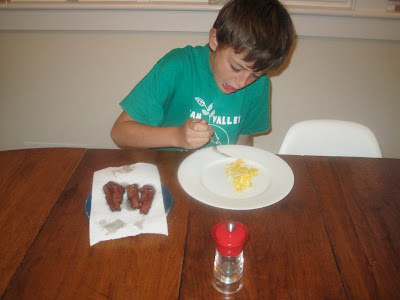 That said, the bacon from the first batch was fantastic, very sweet and curiously, deliciously fruity. Stowell calls for Aleppo pepper, which is an exotic spice, but cheap if you go to a Middle Eastern market. I've made a lot of bacon recently -- it's surprisingly easy -- and this was one of the best. I'd give you a tutorial, but my confidence is shaken.
Ethan Stowell New Italian Kitchen recipe #3: corn and chanterelles soup 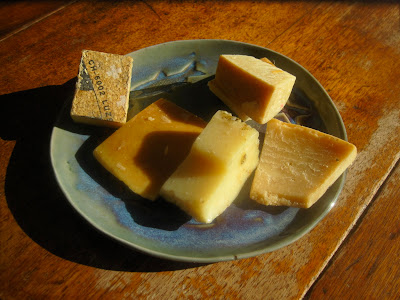 First, you make a rich broth by simmering in a big pot of water all the mysterious and desiccated rinds of old Parmesan and Pecorino in your refrigerator. If necessary, scrape off the mold. I'd been saving rinds for years.

For you're amusement, here's a fried silkie egg: 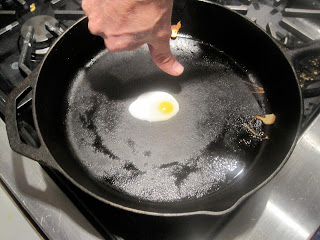 As you can see, the yolk is about the size of a man's thumbnail.The new oddball silkies haven't yet merged with the rest of the flock and are being bullied by our evil ducks. Some of the silkies have problems jumping up onto the roosting pole, but some have managed to do so just fine. They're a mystery, those silkies. Incidentally, as soon as I have collected eight more duck eggs to try a duck egg ravioli recipe from Ethan Stowell's book, we are getting rid of the ducks. If anyone is interested in four noisy, dirty, unfriendly, violent birds, let me know.
In other news, here's a very nice review of the new Dorie Greenspan book.